The general Bile humor is called mkhrispa (pronunciation Tripa) in Tibetan. It means ‘burning’ and it is derived from the Tibetan word snod-mkhris, which is the name of the gall bladder, because Bile disorders generally manifest from malfunction of the gall bladder organ. Unlike the Wind and Phlegm chapters, the Bile disorder chapter does not mention precisely a distant psychic cause. It just tells us that the physical condition or root of Bile is the liver and especially the gall bladder organ. But hatred is always present behind the Bile humor.
Bile is the fire element of the body and its nature has a high temperature. It is one of the most important energies and it supports life with its heat. Generally it dominates the right side of the body and it is a solar energy. The root of Bile is found in the right channel where the psychic energy of hatred is hidden. Psychic hatred and the liver and gall bladder organs manifest the Bile humor and are the main conductors of the body fire. Bile heat protects the body from the coldness and humidity of the Wind and Phlegm humors; it rules metabolism, hunger, thirst, food digestion and nutrition transformation, and it gives temperature to the body. Bile matures nutrition, the body constituents, the organs and the sense organs, and it protects the skin. Bile also gives intelligence, a clear memory, pride and ambition, a sense of perfection, awareness and an egotistic mind. The Bile humor has the same nature and functional characteristics as common fire.

Healthy Bile provides temperature to the body, rules the metabolism and provides an active mind. Bile is active in the stomach, small intestine and especially in duodenum, liver, gall bladder, and digestive systems.
The general Bile function is dominant in the middle part of the body, small intestine, duodenum, and pancreas area, which is between the undigested food area (stomach) and the digested food area (colon).

Bile also produces blood and the blood functions, serum, perspiration, the skin, the eyes, the bile juice, food digestion, the maturation of the nutrients, and rules hunger and thirst; it increases appetite, regulates perspiration and the functioning of the intestines. It transforms the body constituents, clears the skin, provides the body’s radiance, and purifies the waste products. It consumes the excess of Phlegm and balances the Wind humor.
Psychologically, Bile gives intelligence, feelings, interest, activity, willpower, pride, ego and alertness.

The Bile humor has seven characters or qualities: they are oily, sharp, hot, light, malodorous, purgative and wet (sweating). The seven Bile qualities help keep the other two humors in equilibrium. Bile reduces Phlegm humidity and neutralizes the coldness and dryness of Wind.

An imbalance of the Bile humor strengthens its characters or decreases its qualities. For example: the signs of an excess of Bile are: an oily face, hair or body, an increase of the body’s temperature and the manifestation of fever, infection, and sharpness. Bile shows symptoms of instability and lightness which create changes in the stages of fevers and gives a bad odor to the body as well as diarrhea and sweats. In short, Bile may produce fever, infection or chronic digestive disorders related with the liver and bile juice of the gall bladder. 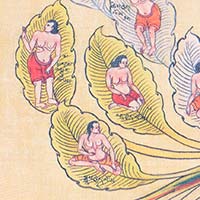 Under the general Bile function, the Bile humor is divided into five types which cover the general and specific body functions. They are called the ‘root or principal Bile branches‘:

1. The Digestive Bile (mkhrispa-‘jubyed, pronounced tripa jujed), is the body fire coming from the liver and gall bladder which digests food. It resides in the duodenum and functions in the stomach, small intestine and colon as well as in the minor digestive stages and in the whole body.

Function
It digests food, rules hunger and thirst, assimilates the food essence (Dangma, chyle) from the stomach and intestines. It matures the nutrients and transforms them into body constituents, maintains the body’s development and increases its heat. It strengthens the other branches of Bile.

Malfunction
Malfunctions of the digestive Bile decreases the metabolic heat medrod, and manifests in indigestion disorders, poor absorption, gastric, abdominal and chronic peptic disorders and the possibility of esophagus and larynx inflammations. In particular, the tongue turns yellow, and appetite is poor.

Function
It transforms the food nutrients into red blood and into other body tissues and gives their different colors to the body constituents and organs.

Malfunction
Malfunction of this Bile will manifest in liver weakness disorders  and will produce yellow urine, stomach swelling, a feeling of heaviness, loss of strength, and will manifest anemia, edema, eye sight disorders, tiredness, and sleeping disturbances.

Function
It gives pride, intelligence, a feeling of self and determination to fulfill one’s desires.

Malfunction
Malfunction of this Bile provokes heart palpitations, strong breathing, strong thirst, poor appetite, trembling, burning or increased temperature in the heart and lungs. Psychologically, it manifests lack of desire, fear, lack of will, lack of interest, depression, pessimism and self-criticism or narcissism.

Function
It enables the perception of forms and colors. It is the light of the body which perceives the world through the eyes, by way of the eye organs and the mental consciousnesses.

Malfunction
Malfunction of this Bile manifests in headaches and pains provoked by alcohol consumption. The eyes become yellow and are able to perceive close objects but not distant ones. Problems in perceiving colors and forms may appear but also various eyes disorders or even blindness.

Function
It functions in the skin and clears its color. It maintains the skin and its temperature. It is a fire energy which encircles the body and protects it from unnatural or negative energies.

Malfunction
Malfunction of this Bile shows the skin becoming hot, dark-blue and rough. It may produce a poor complexion and poor radiance along with various dermatological disorders.