Physiology of the humors and constituents

Buddha Baishajaya Guru said in the beginning of the first tantra:

“Health sustainment or decline is defined by the
Normal or abnormal state of the
Humors, body constituents and waste products”.

As described in the mind chapter, the mind is the background, the pillar of life, the hidden power, the essence, and the covering of the body which provides the base for the physical body to exist. The humors then build the body constituents and develop the system of the body and its functions, and are the basis of the theory and practice of Tibetan Medicine. The theory describes the three principles of the humors and their threefold causes (mental predisposition, elemental energy and physical cause) and their functions.

The mental predispositions cause of the three humors

First of all, even before the physical actions, the mind plays its role. Marigpa (ignorance) is the source of everything including of the mind, itself. Ignorance produces the three mental predispositions and the delusions of the mind of the bardo consciousness, which unites with the parent’s two physical energies[1]. This is the start of life, as we are told in the first and second tantras. Consequently to the unification of the mind and matter, the mind becomes the cause of the manifestation of the  three humors: attachment is the precondition for rLung[2]/Wind humor, hatred for mkhrispa/Bile, and closed-mindedness for Badken/Phlegm humor. These three energies arise respectively from the mental predispositions of the mind and become the psychic cause of the three humors.

The elemental energy cause of the three humors

Secondly, the energy cause for the three humors arises from the five elements energies: the wind element produces the Wind humor, the fire element manifests Bile, and the earth and water elements produce the Phlegm humor. The ether or space element is pervasive to all humors like the globe of Earth hanging in space and supported by all the five elements.

The physical cause of the three humors

The three humors, through their triple-fold dimension (psychic, energetic and physical) develop the body, and govern the body/mind and its functions. They rule physiology, anatomy and morphology, regulate the functioning of the body, its organs, the brain, nerves, bones, blood circulation, lymphatic systems, digestion etc. Balanced humors give positive health and harmony to the body/mind, and provide a good base for the development of the body/mind, the immune system and protection. On the contrary, the loss of balance among the humors causes energy disharmony and physical and mental disequilibrium which may appear at any time and become the cause of diseases.

The humors primary origin is Ignorance and the secondary causes are the parents’ energy and the elements. As we are taught in Buddhism, these causes do not possess an absolutely pure and perfect nature because they are ordinary material substances. Consequently, aging, disease and eventually death exist. That is why the humors are called Nyespa, which means the ‘faults‘ of ‘delusion and having an imperfect quality‘. The humors comprise the physical and psychic three-fold dynamic energy which sustains the body/mind, its health and systems. The humors are the basic principles of Tibetan medicine on which all characteristics of pathology, diet, behavior, medicine, therapy and treatment are based.

The general functions of the humors

The humors sustain health, keep the body systems in order, transform the nutrients into body constituents and power, and regulate the body and mind functions. They have three types of characteristics and natures which function together balancing each other’s powers as described below.

The Wind humor has six qualities or characters while the Bile and Phlegm humors each have seven qualities [3]. The different qualities of the three humors may be oppositional or homogenous. Opposite qualities neutralize the effects of the opponent energy and keep the system in balance, while homogenous qualities, for example food or medicine having the same quality, increase the energy of the related humors and, in case of excess, may lead to the manifestation of disorder. The powers of the humors struggle to rule the house of the body/mind and an inappropriate diet and wrong behavior may promote the cause of disease. Balance and homogeneity among the humors sustain and give strength to the body. In short, the humors inter-reactions and collaboration regulate the physical development, transformation, metabolism, temperature, respiration, blood circulation and lymph systems, as well as the aging and dying processes. The mind and the emotions are also regulated by the three humors. Generally, the humors are also like a body; when the body is young and healthy, the humors are strong and balanced according to the person’s constitution, and when the body gets older the humors’ strength and qualities also degenerate and become the cause of sickness. 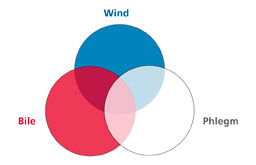 The product of a material naturally bears the same nature and potential as the ‘mother’ material. According to the second tantra, “like a poisonous tree produces poisonous insects”. This is an example which illustrates how an imperfect quality produces the humors. The parents’ energies possess the physical humoral energy which is the quality, on the material level, which provides the direct condition for the development of the humors. Although the parent’s physical energies are impure and have an imperfect quality (physical material) and their nature is ordinary, they provide the life and health of the humors.

To develop the body, all three humors must be present along with the consciousness and the elements, because a single humor cannot produce nor develop the body. A severe lack of vital elements could lead to an unhealthy body/mind. But even if they all must be present, the humors do not exist in exactly equal strength, and one or two humors are dominant and govern the body. This distribution of the strength of the humors defines the body’s constitution.

The general three locations of the humors

The Phlegm humor is based in the head (brain, gland and cerebral fluid), which is called the ‘ocean of Phlegm‘. It functions and controls its system from the head  downwards like the flow of water, and cools down Bile, and nourishes the body.

The Bile humor is based in the middle part of the body (heart, liver, gall bladder and digestive fire) and it is called the ‘fire of the body‘. It rules digestion, nutrition, tissue transformation and temperature. According to the nature of fire, it moves upward and goes to the head. It keeps the water of  Phlegm in balance.

The Wind humor holds is based in the lumbar-sacral area, the lower abdomen (principally in the colon) and in the reproductive organs. Wind rises up from its base in the lower abdomen and moves all the energy. It controls the mind and emotions, fans the flames of Bile, and circulates the Phlegm energy. It continuously makes the energy circulate up from the front side of the body, and to flow down from the head to the bottom of the body through the back and up again from the front. It also maintains balance among the humors and controls the humoral functions.

The natures of the three humors

The nature of the Wind humor is cold but neutral, while Bile is hot and sharp and Phlegm is cold and humid.