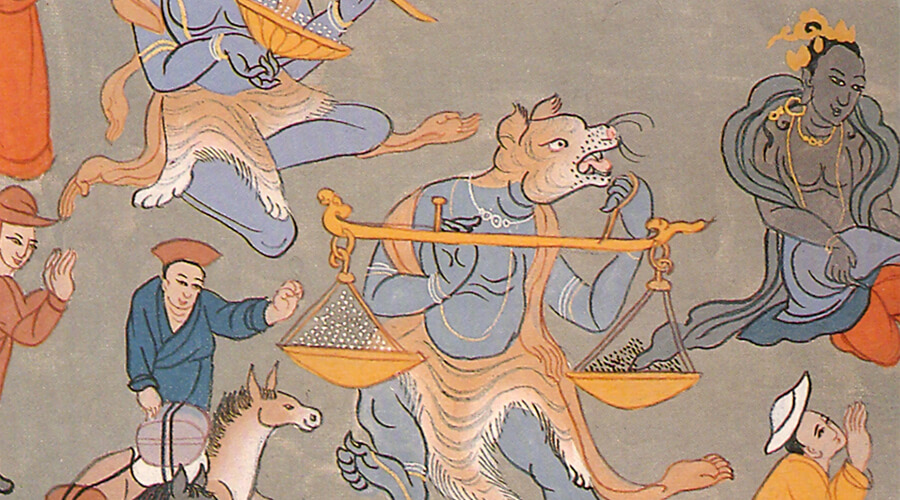 Bardo refers here to the mind in the intermediate state after death or when the consciousness is separated from the previous body. It is the state between the past life and the next coming life. The mind born in Bardo gets a mental dream-like body, which can leave and reach anyplace any time without any obstacles. The maximum duration of the Bardo is 49 days but, at any time, the consciousness may achieve its new life under any form in any of the six realms mentioned in Buddhism. It totally depends on the past lives karma and especially on the karma earned just in the previous life. The Bardo life is made of suffering from the non-acceptance of one’s death and the attachment to oneself and family, friends, possessions, etc.

The ‘Tibetan Book of dead‘ explains in detail the Bardo hallucinations and experiences and introduces to the self the recognition of the illusory body and mind. The kusum-lamkhyer practice, ‘taking the three Kayas into practice‘, is a daily life practice for the preparation of dying, Bardo and reincarnation.

What happens after death?

After death there is no doubt a ‘mystical world’ that all beings must pass through before being reborn, also known as the passage of Bardo. Afterwards, fortunately for us, we do not remember. Therefore it always remains a mystic and unknown world. Many masters have left guidance and experiences of their journey through this land of the Bardo, a path later followed, literally and practically by disciples and students. But having once passed through the bridge of the Bardo, it remains in the shadows of the memories of ordinary people. All religions and cultures have their own visions and experiences regarding ‘after death and experiences’, that are assimilated by subsequent generations. All bring different understandings to the phenomenon of death. I should like to share my understanding of the Tibetan culture, medicine, astrology and Mahayana Buddhism on the ‘after death and experiences.’

The Tibetan people and their long culture likely provide the roots of the Himalayan peoples and cultures. Tibetans enjoy a strong ethnic/tribal culture regarding life, health, death and dying, mostly continuing the practice of an ancient, native, animistic religion and worship of the local spirits. They believe that evil spirits are the source of all misfortune and disease, as these spirits govern human society and provoke the causes of disease which torment human beings. As a protection against the spirits, Tibetan shamans developed shamanic rituals to propitiate the ancestor spirits and demons. During ancient times, it was believed there was on earth a socio-structure made up of three types of beings, belonging to two proprietors:

Tomb and death feast (mtshun mchod)
The human tribes have great respect towards their deceased parents and relatives by nature. They begin to create the private or family grave and they call their ‘ancestral spirits’, hold feasts and communicate with them annually. This spawns a death feast culture and the advent of the death ceremony. The shaman priest plays the role of chief and regulates the customs. In the beginning, native shamans made the Tomb and celebrated the death feast (mtshun mchod) with offerings of food, drinks and sacrificing of animal blood to the ancestors. They also made the same offerings to the worldly local spirits for protection and good fortune. There is a belief that the ancestor spirits need to survive by human food and nutrition and that by providing good nourishment they will fulfill the wishes important to the family clan. This is called black Bon (Bon nag) tradition, which has deep knowledge on death and ancestor spirit relationships.

Bon founder Shenrab Miwoche (dispute as to exact time), visited Tibet and subdued the black Bonpos (bon nag), establishing the white Bon (bon dkar) religion and what many call ‘civilized society’. This brought modifications to the existing customs relating to death and dying, and feasts for spirits, and remained the prevailing culture until Buddhism came to Tibet. White Bon religion established a system of royal spiritual master (sku gshen) to the Tibetan kings. They built kings tombs and also minister and family graves.

People believe that the soul of the deceased resides in the Tomb, so they go there to make offerings of food and other objects such as animals, every year. This tradition is present in the literature of both Tibetan medicine and astrology.  It is a vast culture and useful in human society. Tibetan astrology Jungtsi (‘byung rtsis) horoscopes explain much on birth, death and dying and especially the departing soul and Tombs relationships. Also, the Parkha (Bagua: I ching: trigram) is considered Astrology of bone of mankind and explains much on death and dying, and cemetery relationship to the health, wealth, and misfortune of individuals and family. Even today, Tibetan people believe in this concept and respect the law of astrology.
This culture is seen as unique in major Asian and western countries where there is care and respect for the burial of the body in the cemetery and remembrance of the ancestors. Tibetans also do their private burial graves, but over time the sites change and eventually disappear. This is considered problematic and unwise because according to astrology, lost or missing skull bones (mgo rus ma tshang ba), or burial in wrong place (dur gdab nyes pa), may bring misfortune or health problems to the individual and family.

Ancient burial traditions were pinned to the local prevailing astrological rules. For example, the mode of  burial: burial in the river called water burial, earth burial, fire burial, air burial or sky burial was dictated by the astrological sign of the deceased. In later times, the dominant modes of burial became the sky burial (bya gtor) and fire burial (pur byang) or cremation.

Tibetan medicine understands that the human body develops through the assemblage of the five elements, and that they produce the tissues, organs, sense organs, channels and chakras, and develop the body systems and consciousness.  On the other hand, the destruction of the body sees the reverse process. This is called (’jig ltas) the sign of destruction. The Gyud-shi medical Tantra, clearly explains that the terminal person’s body elements and consciousness will dissolve one by one, and when the system completely breaks down it is called death (‘chi ba). However, even when the dissolution of the five elements and consciousness has occurred and the person is medically certified as dead, astrology and Buddhism conceive of a subtle dying which takes an additional three days to complete.

Astrology explains that the sustenance to the power of the health, is life (srog), body (lus), power (dbang thang) and success (klung rtsa), but that Lha (bla) is the fundamental factor of the life. “Lha”, simply put, is the third body of the person. It arises from the combined product of body-mind. It is extremely interesting that the stableness of life (srog) is not only inner body-mind, but is also much connected to outside environmental factors such as a particular lake, rock, tree, animal, precious stone etc., related to the Lha. They are called places where life energy Lha dwells.

This can be roughly translated as:
“Life terminates by worldly killer spirits (gshed ma)
Consciousness follows the karma
Lha remains in the graveyard”

This is one of the fundamental subjects of discussion in medicine and astrology. Astrology does not explain, nor is it much interested after the death and pacifying and liberating of the soul from the body. Instead it explains and explores deeper the health and fortunes related with survival. Therefore, astrology is one of the key interests of the people and belongs to psychology and psychotherapy in Tibetan society.

All Tibetan Mahayana Buddhist schools believe and go into much detail on the ‘soul after death’, and especially the consciousness experiences in the Bardo.  Most important is the basic study and practice on how to prevent death and dying, and also, on the other hand, taking advantage of the great opportunity to liberate self from the misfortune of death and dying. In particular, Buddhist Tantra teaches the basic study and practice of Sadhana and transformation of three bodies into the three Kayas of Buddha from the death and dying experience. Simply speaking, the practice that transforms the sleeping, dreaming and awakening in the morning, are transformed into the Dharma kaya, Sambhoka kaya and Nirmana kaya respectively, by mixing and transferring the soul (sre ba skor gsum/dgu). All Tantric Mahayana deity meditation contains this basic practice which is the core practice for all practitioners.

To put succinctly, there are two main components:
Firstly, meditation training on dissolution of five elements, five consciousnesses and five aggregates, with each part having outer, inner and secret signs and hallucinations and appearance of illusions. Finally, all physical parts disintegrate and disappear into the space element and the senses consciousness also dissolves into mind consciousness and it also dissolve into the space the emptiness.

Consciousness in Bardo and hell court

The failed consciousness will be reborn in Bardo after three days. It is an illusory body of the mind. It is perceived to have everything of the previous body-mind, but this gradually changes with time. Bardo Thödol (the great liberation) Tibetan book of dead says:
“Being like physical body as past life (by memory)
Possess all five senses and pass through objects without obstacles.
Having great karmic power
Can see same type of bardo beings by god’s vision” [2]

‘Bardo Thodrol’ the Tibetan Book of the Dead or Great Liberation by Hearing, is one of the fundamental books of study and practice for the subject. It explains that the fourth day counts as day one, and from that day for another 49 days, are the Bardo days, where the consciousness suffers in Bardo by different emotions. Positive karma causes the appearance of a better Bardo environment while negative karma results in misery. All is illusion and manifests to the mind through fear of one’s own Karma. The sound, rays and light are three which terrorize the mind of the Bardo. Meanwhile, the Lord of Death calls the deceased soul to the hell court trial. The white and black spirits (lha ‘dre dkar nag) of the person will present his or her deeds, according to the ‘Bardo Thodrol’. The karmic judge, the Lord of Death, will decide the future for the new life.